Exploring the land of watery legend and African waterlilies by dugout canoe.

I met the Delta as many do - a branched hand extended for a handshake on the map of Southern Africa. This exciting geographic asterisk warns “Nothing will be the same after this.” The Delta draws countless tourists each year – and why not? Botswana is a pleasure. The people are some of the friendliest. First time on safari? Botswana offers safety and assurance to self-drivers and luxury travellers in equal measure. A seasoned safari veteran? One cannot escape the fact that this is one of the top wilderness areas in the world. Elephants on the highway, hippos grunting from the river in town – this is wildlife mecca.

This year, I was tasked with writing an article on the top active safaris in Africa and I was hell-bent on finding a company which allowed guests to pole their own mokoro (a six-metre dugout canoe). This was easier said than done. The expectation (it seems) is to sit, gondola-style, traversing the maze of the Delta in a state of recline. I know it’s not for everyone, but that’s not how I like to explore. My boyfriend had poled the length of the Delta in an 8-day feat in 2011 and it was quite simple – this is how I wanted to learn about this extraordinary part of the world.

A trip was borne. We were on the way to Etsha 13, a village in the north-west of the Delta, to meet Galle who would pilot our adventure. We drove along a sand road into the village and set up our tent in his garden for the night. We discussed the plan and met his second-in-charge, Sparks, in a semi-circle of plastic chairs and the shade of a single stick tree. We would leave in the morning. Their task for the afternoon: to find a fourth ngashi (a long, forked pole used to power the mokoro); we would all be pushing.

We woke to a freezing Botswanan morning and made our way down to the water. We loaded our gear and the first mokoro set out under the watchful gaze of some local farmers. My introduction to the Delta waters was bottoms-first. To the uninitiated, balance either comes naturally or after a range of spectacular, public falls. In my case, the latter.

I quickly got into the swing of things. The forked end of the ngashi is wedged into the ground beneath the water and moved through the hands to propel you through the water. We made our way through farmlands - donkeys knee-high in peace - into ever-increasing, blissful and wild nothing. The waterside was punctuated with saddle-billed storks, sandpipers, and herons. And then the curves narrowed and the homesteads disappeared and farm life gave way to wildlife.

Into the papyrus. In a craft shorter than the bend. We fought the thick stems in hot tunnels underlined with dark water. We fought to get through with corresponding grunts of exertion for kilometre after aching kilometre. We heard elephants cracking and crashing through the papyrus, unseen, in the whispered hope that they would remain that way on this stretch of the trip.

Out in the open floodplain, everything changed. There is nothing more natural than the forward motion of an ngashi – and I felt that extraordinary truth in every muscle in my body. The water was so clear, my route markers became the spindled waterlily tentacles reaching for the smallest, meaningful contact with the earth in a world made of water. I came face-to-face with little bee-eaters on branches right at eye level and am since convinced that this must be one of the best ways to see birds up close.

We slid up to the bank and re-acclimatised to the feeling of steady ground after 20km of consistent poling. Sparks, the man as silent as he is wise, caught some fish and true camaraderie was bonded, using sausage tree fruit as fireside chairs until exhaustion ended the day. Going for a walk, Sparks emerged from his tent with a stocky pair of binoculars – this character never ceased to surprise. We saw elephants and placed our footprints in the dust of Delta islands for a short time before we turned and went back. The privilege of the experience made the fight against papyrus unremarkable on our return. The procession of farmers astounded at our accomplishment, however, spurred us on to the very end.

Long after returning home, long after re-adjusting to solid ground, I can still channel the gliding feeling of poling over Delta waters and I know a passion is borne. This is how to explore Africa’s wild places: by local craft, alongside local people who call this wonder of the natural world their home, their pantry, their escape; a standing moment paused in evolution. 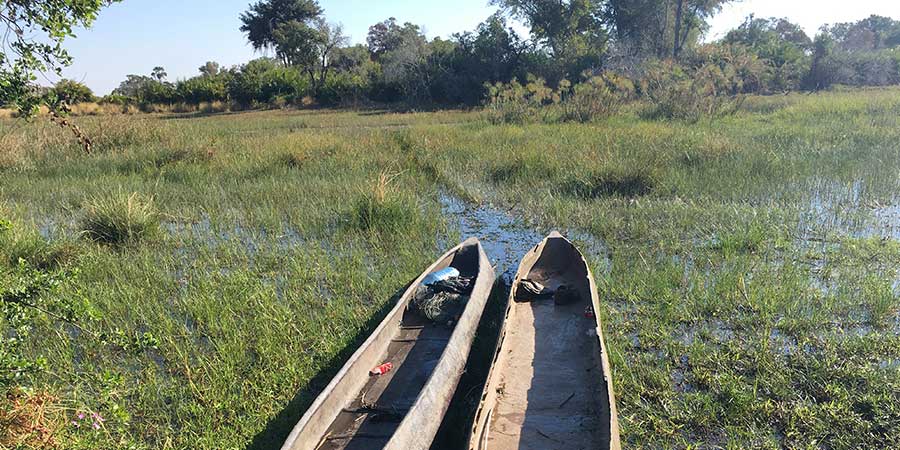 Includes Factory Shop Specials.
Get the best outdoor gear now for even less.

Products in our Story