Learning To Read A New Landscape: A Namibia Safari To Etosha National Park

Lessons in Time and Place and Scale From Etosha National Park

Like a dedicated scholar, my life’s work is evolving my fluency of Africa’s wild places. Namibia’s signature remoteness is like deciphering an ancient text – something that speaks to our origins and the mysteries of ourselves. On arrival at Etosha National Park, it is clear that to rush would be to skirt the extraordinary. It is a park in which undisturbed distance draws the human eye in to seeming nothingness – hypnotic in its effect on time and space and scale.

My introduction to Etosha was shimmering horizons, as if the sky had started to claim the earth in a contest of white land and bright light. Long, flat expanses of land betrayed the feeling of infinity with a tremble – an undeniable energy that signalled the heat between the terrestrial and the cosmic.

Etosha Pan is almost 5000 square kilometres, taking up about a quarter of the park. Across this great flatness, wildlife emerges from and disappears into the haze. What happens beyond this impermeable distance many of us will never know – but lines of dust-footed zebra, ostriches, and elephants in white camouflage paint serve as silent connectors between us and the unknown.

Perhaps it is human nature to seek out structures, patterns. Behind a bush or in a tree, our imaginations frame possibility. My brain felt ill-suited to this feeling of never-ending space, where truth is laid out before you – if your eyes are quick enough to take it all in. It is like learning to read in a new language: an adaptation to something new, a feeling of exaltation when understanding is struck. →


What To Pack For Namibia > 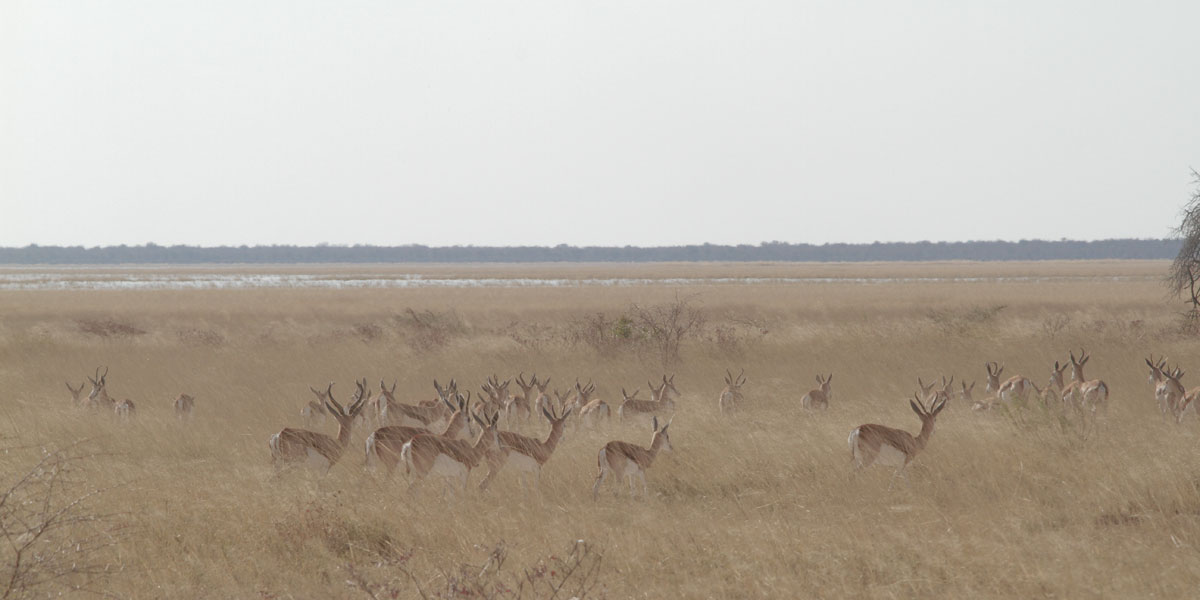 Letters On The Landscape
If the horizon holds the unknown, the cuneiform letters of springbok ears are the poetry of a moment - and the moments on safari are often bigger than the words we have for them. 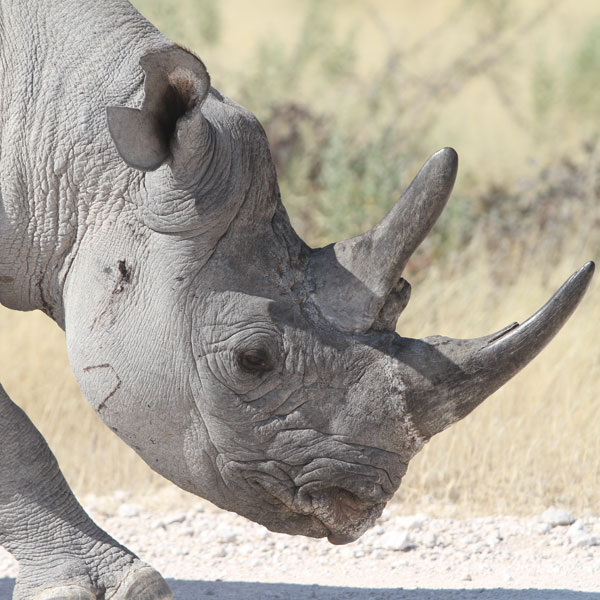 From our dust track, we watched herds of zebra and wildebeest move and rest and forage in almost outstanding numbers. In this land of sparse vegetation and little water, as if pulled by the unknown, lines of game would etch their tracks into the distance. The sway of their gait and the rise of their dust headed towards the centre of the pan like disappearing ink – fading dots that displace all notions of sense and size as they disappear into mirage. Closer to the road, more rhinos and great elephant bulls, caked in white, loomed alongside the car like huge clay animals - a link to a time before written words.

Nature’s great spectacles easily take on the stature of modern marvel – and history, the recognition of our roots, and our search for meaning are so often the connective tissue between the ages. Sitatunga and quagga fossils have been found on the pan. At first glance at the scenery, the history of these specimens tells a story of a changing world. As casual observers from the cab of a 4x4, the outlook is one of sacred land for wildlife – as far as the eye can see and beyond. This hidden land holds histories of extinction and secretive water creatures and the importance of this apparent nothingness to our natural history. More recently, this ‘great white place’ (the meaning of ‘Etosha’ ascribed to the place by the Ovambo) has the feeble and transient markings of human exploration to add to its chronicles.→ 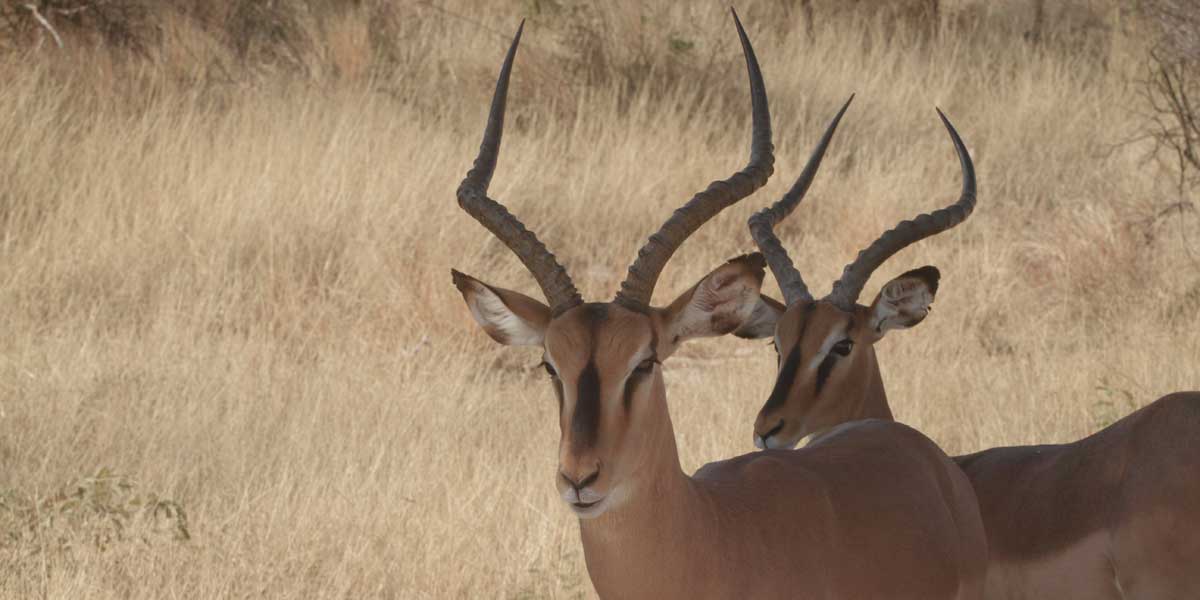 The Spilled Ink of Different Species
The 'specially protected' black-faced impala is endemic to Namibia, so an Etosha safari is the perfect opportunity to see this antelope.

Our trip started at Onguma Campsite. This is located outside of the park, a short distance from Von Lindequist Gate on the east of Etosha National Park – home to the fortress camp of Namutoni. This was the ideal springboard for round-the-pan adventures. We watched as, in the distance, gusts of wind blew up huge, prehistoric sand clouds – like dust blown from a long-forgotten bookshelf. In a thicket, two black rhino grazed with a crackle of branch and a huff of breath. We watched their medieval armour disappear into a fort of thorns and thicket. Hours later, returning back to this spot, a lone male lion sunned himself in the afternoon light, watching a herd of kudu under cover of nothing more than tufty grass and tawny skin.

To traverse the great main pan from one side of Etosha to the other is to move through one astonishing landscape to another. From uninterrupted plains to the relative intimacy of mopani scrub, each area holds its own allure – as imagination kicks in and eyes scan for hidden life behind leaves and grasses. A lion, wooed by some silent call of the pan, walks into the distance with a lioness following less assuredly behind. We watch until they are but specks of lions, unhidden by bush or undulation.

It is exceptional to see the world’s most fantastic beasts out in the open, so connected to the distance. It is another to see them up close, their eyes fixed on your presence. A stone’s throw from Okaukuejo (our next stop inside the park), two lions lie in the shade centimetres from the road. A murder of crows fighting for a closer look held their attention, golden eyes to the skies, fighting noon laziness for curiosity. → 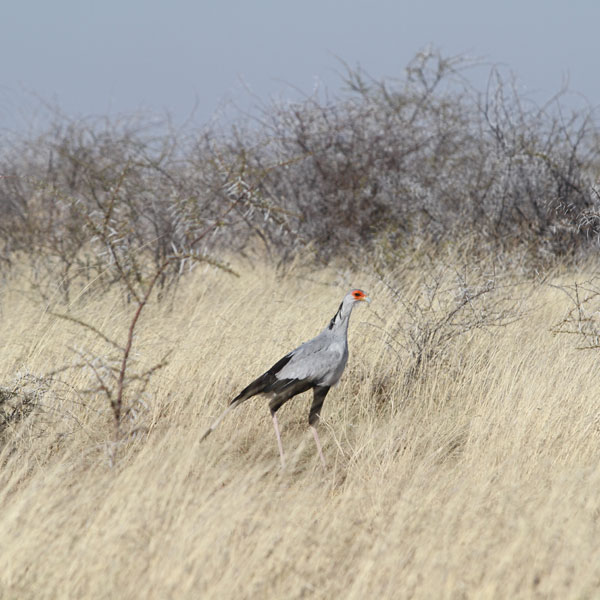 To traverse the great main pan from one side of Etosha to the other is to fill the pages of our personal stories from cover to cover. 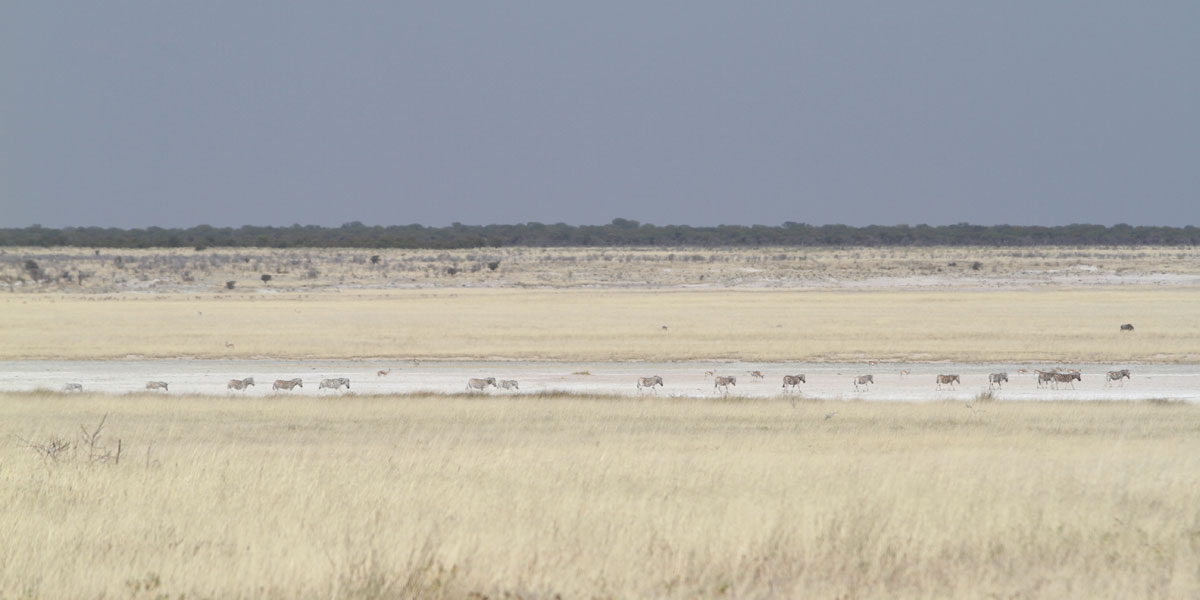 Writing Lines
It's not uncommon to look see a set of perfect parallels running along the horizon - an interplay of land and animal and shimmering hot sky. This is like nature writing lines - an exercise that defies perfection and happens whether we are lucky enough to witness it or not. 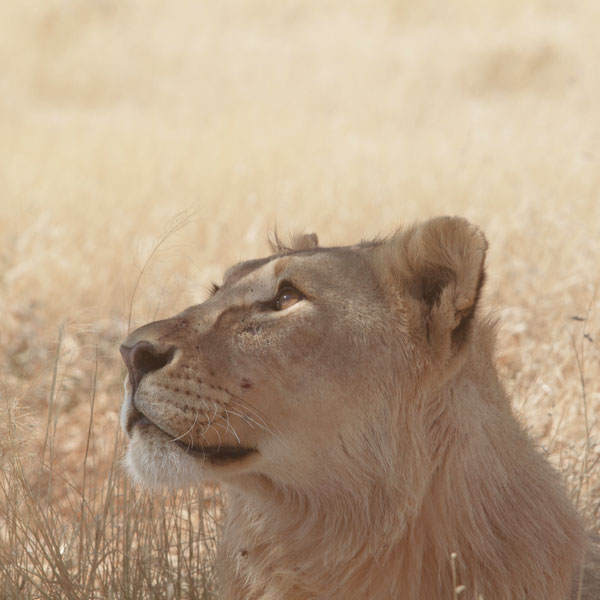 Okaukuejo lets manmade monument take over from natural for a time. Rather, the two work in tandem for something a little different. The tower at this camp is a fantastic place to take in 360 degrees of view from an almost fairy tale vantage point. Beyond these walls lie wonder, unlocked for you to explore from sunrise to sunset.

We walked down to the waterhole in front of camp to see six black rhino communicating in Jurassic Park tones against the darkness. We spent hours watching them come and go from the limits of the orange floodlight – a wild theatre with a tinted stage light for all-night-long nocturnal viewing. This is a privileged view into after-hours Africa in Etosha. This is the child-like excitement of reading by torchlight.

The road to Olifantsrus was wildlife-filled waterholes in arid expanses. A hundred zebra, a hundred wildebeest, a handful of gemsbok stood in frozen watchfulness over a giant male lion, dozing in the hazy dawn light. Suddenly, his attention shifted from his morning nap to a line of unsuspecting zebra who galloped away, bucking up dust, as he charged in their direction. The hunter, unsatisfied, shifted position to wait. Springbok and zebra went ignored, assessed through half-closed eyes. Its lazy gait brought a giraffe into view, the ebb and flow of movement shifting from ground to tufted horn – not enough of an elevation to show the lion frozen in wait. In a burst of dust and paws and long legs, he charged. Chaos on the ground. → 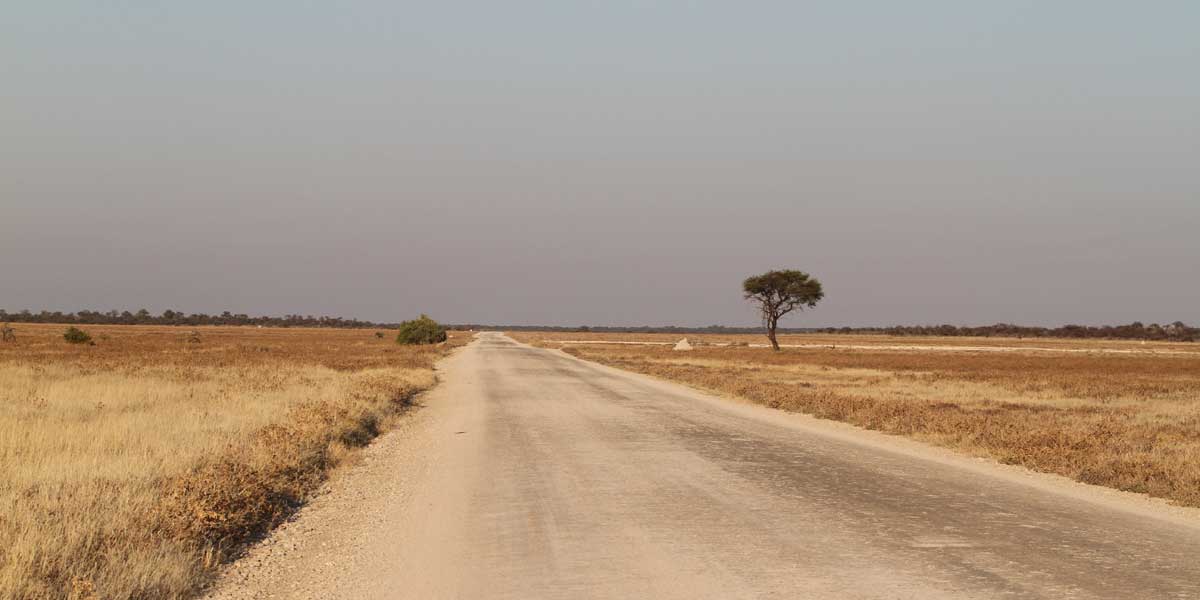 The Blank Page
Namibian scenery is extraordinary in the emptiness around every corner - and Etosha National Park's landscapes are no exception. This is the blank page upon which unforgettable experiences are formed and remembered.

On to the next waterhole, a pride with young males, a couple of lionesses, and some cubs had paused operations for thirsty game, who watched these young predators from a safe distance. Huge flocks of Namaqua doves flew down, undeterred, to the water’s edge – only to erupt into the air once more as a falcon swept the bank like a fighter plane. Chaos in the air.

At Olifantsrus, we took in the double-storey view of the waterhole. Preservation of wildlife lies in front of you, while the remnants of the elephant culling station lies behind – a reminder of the sometimes gruesome narrative of humans and wildlife living together. For a moment, you wonder who the fence is for, really. Human chaos.

On an afternoon drive through this, yet again, very different scenery, we follow lion prints the size of side plates, watch zebra and wildebeest hover over grasslands. We see an elephant throw dust in the air in celebration of the elements – African wildlife colour festival in the hues of Namibian sand. That night, camping on the fence line, the sparks from our campfire join the whoop of hyena – sky writing the day’s stories and sending them into the darkness. → 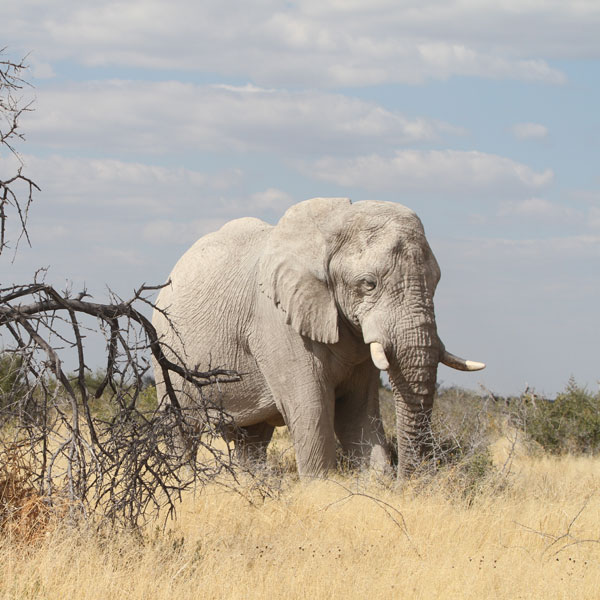 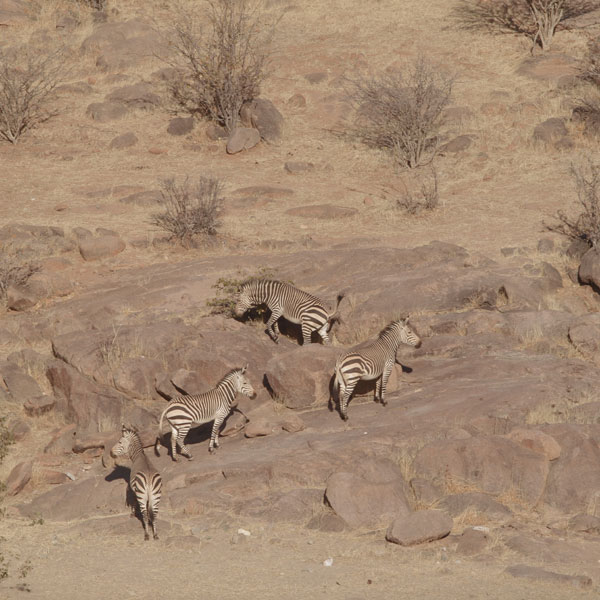 Past Dolomite Camp on the way to Galton Gate, great flatlands give way to dark koppies. Wizened ancient rocks look down on the fresh face of humanity in their game viewers and rental 4x4s. As the landscape changed, so too did the zebra. Burchell’s Zebra was replaced by the more intimate herds of Hartmann’s Mountain Zebra – the subtle stripe variation like long lost mountain calligraphy.

And, suddenly, we are pushed out of Galton Gate with the jolt of reality that comes with tarmac – but it didn’t take long for Namibia to remind us that she is wild first. We took a short drive to Hobatere, snaking between the messy rocks of the koppies to our campsite. This was to be our gateway to Damaraland. I had dreams of desert lions and elephants, tempered by the lovely realisation that the challenge of geography meant the odds were quite low. Namibia is an unread book, with great, inhospitable chapters to be deciphered. Inspired by the guidance of a lion roar in the night at Hobatere, this manuscript commanded my full attention. → 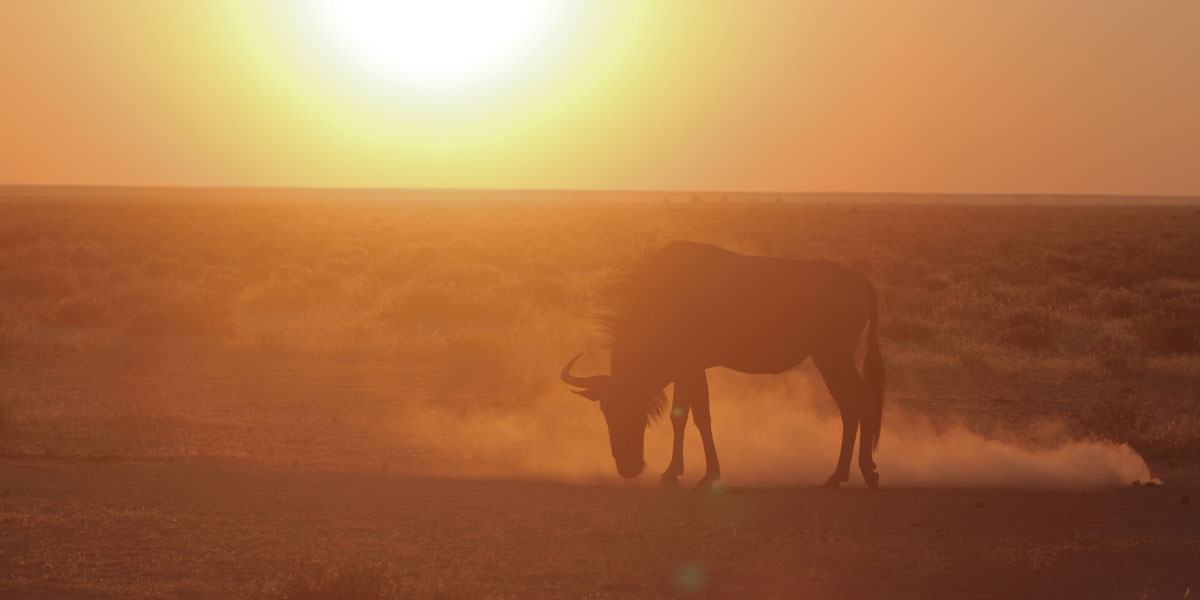 Coloured Pens
Dust and light let loose in a show of colour at sunrise - before the stark white and thornveld colours of midday take hold. 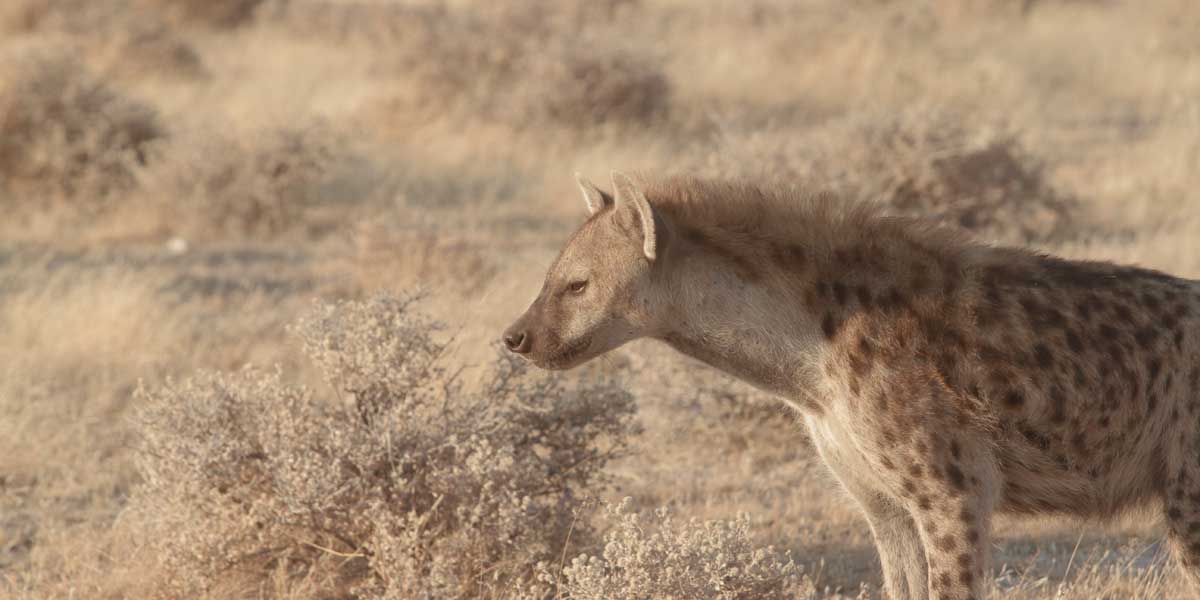 End of the Night Shift
Walking the road just outside Okaukuejo, a spotted hyena makes the commute to its den after a busy night - signing off as the sun climbs higher in the sky. 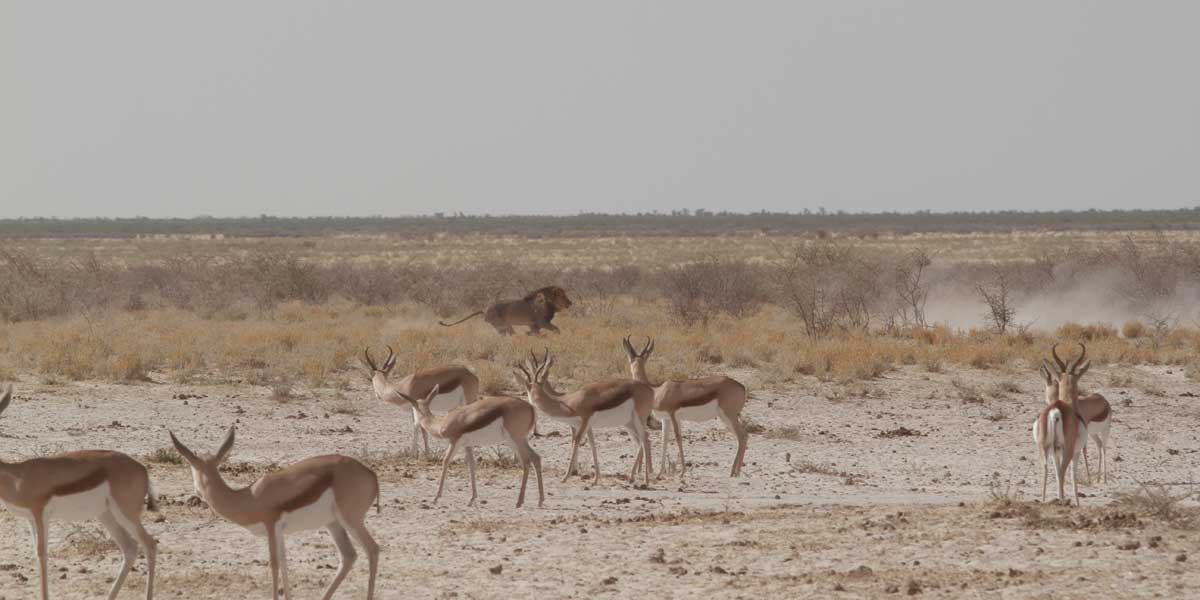 Hunting Between the Lines
The dryness of Etosha means the waterholes are incredible points for congregating game. We watched long lines of springbok, wildebeest, zebra, and gemsbok heading to drink. We watched a male lion's unsuccessful hunting attempts over a couple of hours, together with lines of game. 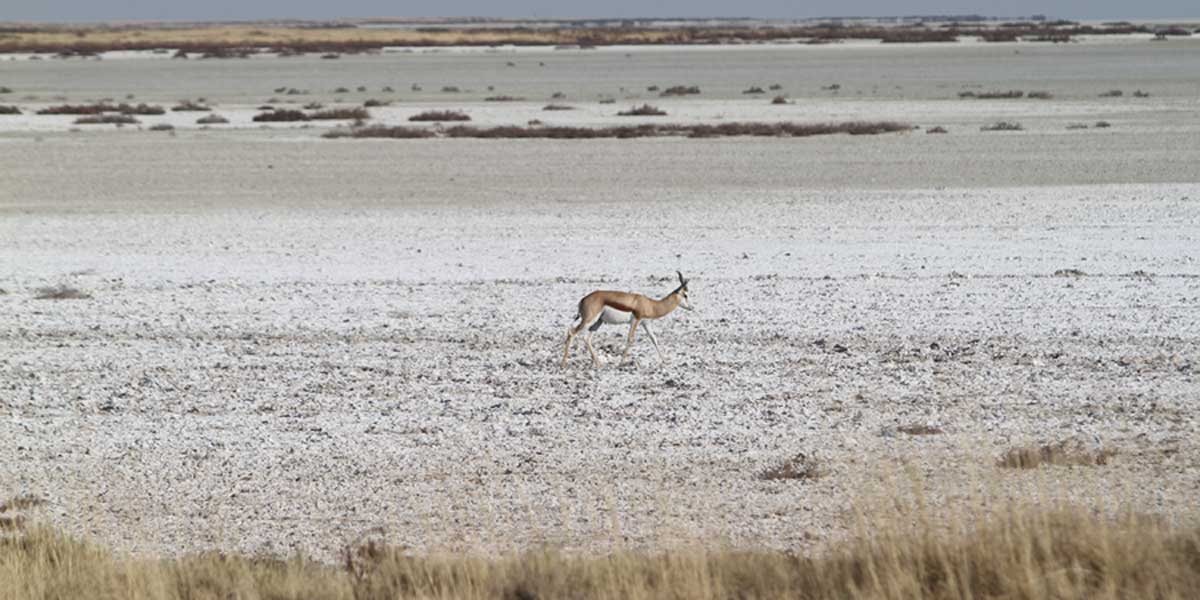 Paper-White Relief
The stamp of wildlife against the stark white of the pan made for game-viewing in a setting that's remarkably different to savanna safaris - and made for some wonderful photographs. 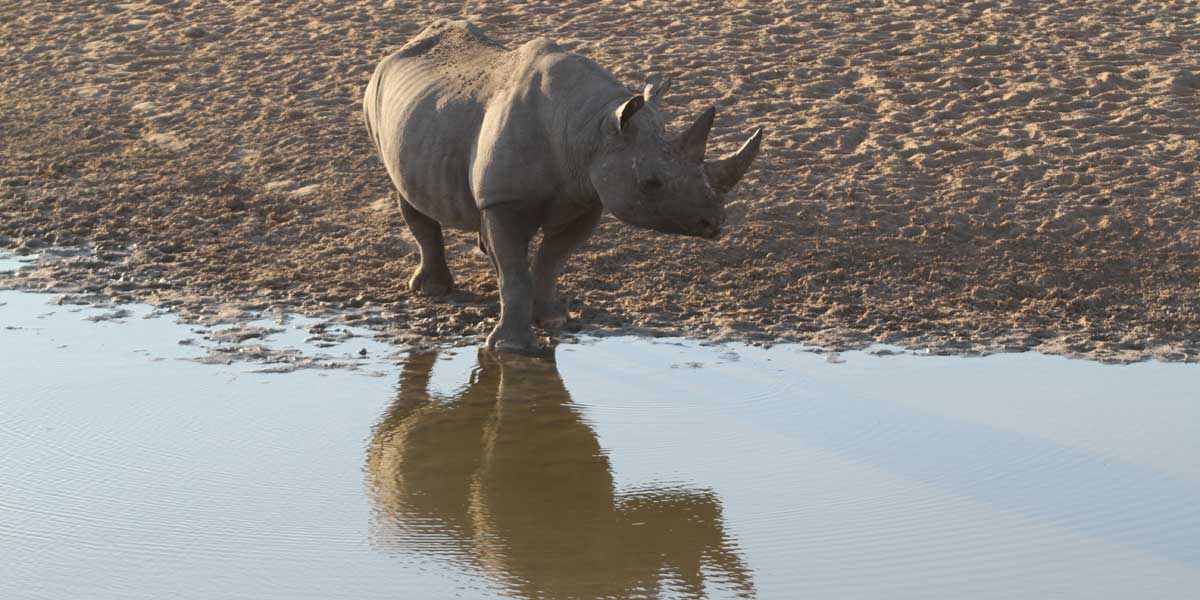 Rhino Reflections
On our last night in the park, we sat in a viewing area and watched as wildlife came to drink - life communicating with shadow and reflection in its own secret language.